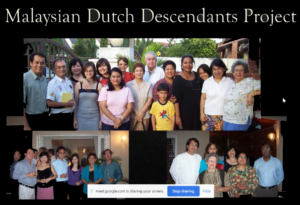 On February 27 2021 Malaysian Dennis De Witt (with far roots in the Netherlands) gave an online presentation organised by the VNM entitled ‘The Dutch of Malakka’ to an audience of about 40 people. Dennis De Witt who is the author of History of the Dutch in Malaysia and Historical Tombstones and Graves at St. Paul’s Hill Malacca, talked about the history of Malacca, the relevance of the historical site on St Paul’s hill and plans leading up a planned ‘The Dutch of Malakka’ event and also about the nowadays position of the descendants of the Dutch living in Malaysia.

The history of the town of Malacca in Malaysia goes back to its founding around 1400 and to what was to become the grand Malay empire under the Sultanate of Malacca. In 1511, the Portuguese captured Malacca, the Dutch in turn took Malacca from the Portuguese in 1641 and in 1825, Malacca came under the British until Malaysia received its independence in 1957. In more than 600 years, the epicenter of the development of Malacca’s history was focused on St. Paul’s hill.
The Portuguese build a grand Catholic church on top of the hill. After the Dutch took over Malacca, the church was used as a Dutch Reformed church. However, with the building of a newer church at the foot of the hill, the church at the top of St. Paul’s hill was left to ruins and served as a cemetery. For the British, the hill was maintained as a cemetery and used as a look-out point. St. Paul’s hill also now remains as a popular place to visit for tourists who come to Malacca.
Dennis De Witt told also about the plans for new translation plaques at the tombstones so that visitors can understand the Dutch texts on these. It is planned to unveil these plaques during an event in Malacca entitled ‘The Dutch of Malakka’. This event will be filled with activities to showcase, among others, the Dutch influence on the history of Malacca and an exhibition on the families of Dutch descendants from Malacca. Covid-19 makes the moment of this event unsure.